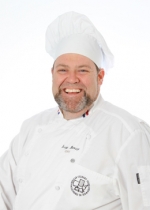 This fall, Gerald Bonsey celebrated 30 years as Executive Chef at York Harbor Inn. He started soon after graduating from the culinary arts program at Johnson & Wales in Providence, Rhode Island. The inn has grown from 12 to 66 rooms, and now has two 125-seat restaurants plus a banquet hall for weddings and other events. Bonsey recently added another activity to his duties: bee keeping, supplying very local honey to the inn.

How did you get into food?
I cooked at home when I was a kid – my mother worked, and I liked to eat. I started making dinners for the family. Some were good, some not so good. I just made whatever my mother told me, things like meatloaf, chop suey, oriental style – that was cutting edge back then. In high school, I talked to my guidance counselor. He said, “What do you like to do?” and I said, “Play the drums and cook.” He asked me if I was a good musician, I said no, and he said, “Go to culinary school.”

What are some of your signature dishes?
Believe it or not, our most popular item is the Harborside Haddock Sandwich. It’s not deep fried, but lightly crumbed and grilled, with cheddar cheese, served with a caper mayo. Another popular dish is Lobster-Stuffed Breast of Chicken with Boursin cheese sauce. I made the mistake of taking that off the menu once and I heard about it from all the guests. I put it back. We have an Apple Cider-Brined Pork Chop. I used to think you could only sell pork in the wintertime, but it seems to be popular in the summer as well. We also offer a lot of gluten free items, and I usually run a Skinny Chef Special for brunch.

What’s that?
Well, I’ve lost 120 pounds over two and a half years, so I usually do a breakfast special every week that’s under 500 calories, with more emphasis on the protein, like Seared Salmon Over Corn Tortillas. We also have a homemade Veggie Burger, because I never found a premade one that I liked.

How has your cooking philosophy changed?
When I started, I had a little bit of an attitude, and I took everything off the menu that I considered pedestrian, like French Onion Soup and shrimp cocktail. I didn’t even have steak sauce – demi glace, Béarnaise, beurre rouge, that’s all you needed. Then I realized, you have to cook for the guest, not for yourself. People like French Onion Soup.

What’s with the beekeeping?
Someone mentioned to me that they took a class, I said that’s interesting, the next thing I know I’m taking the class at adult education in York. I have four hives at my house and four at the inn, and I harvested 180 pounds of honey this year. The inn guests really enjoy it. It’s kind of a challenge – it’s good for me, calms me down. You have to be calm around bees, move slow and gentle, which is not really me. I have to step back, relax. Bees definitely notice when you’re angry. I tried working without gloves – but I guess I’m not that calm and gentle.

What are you doing for Christmas, since the restaurant is closed?
This year I’m having family over Christmas day. I’ll probably do more hors d’oeuvres stuff. Though I have to have lobster because my niece demands it. I like chorizo cooked in red wine – doesn’t look pretty, but tastes awesome, with garlic and thyme.

Any advice for holiday entertaining?
Keep it simple and make food you can prep ahead of time and finish quickly, so you can spend time with your guests.