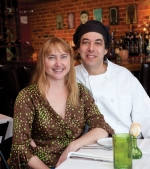 In restaurants, a new season means new dishes, and for Karen Keohane and Matthew Sharlot, it also means getting a chance to cook up brand new ideas as a team. “The most fun is being creative together,” says Karen, who co-owns The Wellington Room with Matthew, her husband of seven years. Karen and Matthew describe their food as new American with French and Asian influences, and the menu emphasizes seasonal, organic ingredients. In fact, the menu changes constantly, “depending on what’s fresh in the garden,” Karen says.

Karen is a foodie who lived on a vineyard as a kid and has worked in restaurants for years, but Matthew is the chef at The Wellington Room, while Karen manages the front of the house. “If you want your marriage and your business to survive you should each be very clear about what your responsibilities are,” Karen

says. “With food, I’m going to ultimately give him the right to override me because he is the chef.” But that’s not to say they don’t share in the decision making. “That is the tricky part—the overlap—because we’re both owners of the whole restaurant,” Matthew says. “There’s got to be a sense that each person has veto power on something they feel really passionately about.”

Karen says running a restaurant works for them since they’re both good listeners who have the ability to stand back and evaluate criticism with an open mind. In addition to the fun of being creative together, there are other perks of co-owning a restaurant. Since opening The Wellington Room in 2008, each has come to

respect new things about their spouse. Karen says she admires Matthew’s “leadership in the kitchen,” while Matthew is “constantly impressed” by how good Karen is with people. “She can keep giving and giving and giving.”