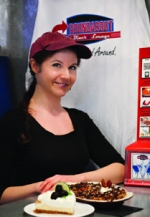 Schaefer has been the Roundabout Diner’s pastry chef since the Portsmouth restaurant opened in 2010 nd has loved every minute of it. Before that, though, her career was decidedly lackluster. “I worked in an office and I hated it,” she says. “I spent all my time looking though cake magazines.”

So she ditched the desk and went to culinary school, graduating in 2008 from a two-year, hands-on program at the New England Culinary Institute, where she completed two six-month internships and won a $10,000 recipe scholarship. (The winning confection? Cinnamon Crêpes with Apples.) She also won the Vermont state chocolate show in 2008 with a Chocolate Dream Catcher—while she was still a student.

Clearly, leaving her office job to pursue her passion was the right move for Schaefer, 30. “You make people happy, that’s all you do,” she says. “What’s the best part of your meal? Dessert, that’s for sure.”

Schaefer’s retro dessert sensibilities are the perfect match for the throwback vibe at the Roundabout. She’s got a “been there, done that” attitude toward fancy desserts that are “10 feet high” and have five components on every plate. “So many people get caught up in how it looks, all the fancy stuff,” she says. “That’s all great and beautiful, but if it doesn’t taste good, what’s the point?”

Instead, Schaefer prefers a simpler, homemade aesthetic, often emphasizing new takes on old-fashioned desserts. She points to her Twix Layer Cake, which stems from her recent fascination with turning confections into desserts. She uses white cake with layers of shortbread, caramel, and chocolate ganache to create a dessert version of the candy bar. She also loves turning drink flavors into desserts, like her Hot Chocolate Cake, which combines cake, chocolate mousse, mini marshmallows, and a marshmallow meringue that’s toasted with a blow torch.

Despite the fun she has turning candies and beverages into cakes, Schaefer says the oldest of old-fashioned desserts are often the most consistent customer favorites.

At least half of her recipes come from her mom and grandmother, and the restaurant’s very best seller is none other than its simple and sublime Banana Cream Pie. “Keep it simple, keep it good,” Schaefer says. “I send out a slice of pie with a scoop of ice cream and people love it.”