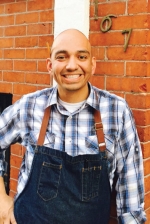 David Vargas, Vida Cantina’s owner and executive chef, is a second-generation restaurateur. He learned the secrets of cooking traditional Mexican food from his parents’ Casa Vargas when he was growing up in southern California. Locally sourcing many of his fresh ingredients, Vargas combines ﬂavors and spices to bring the Seacoast a true taste of Mexico with a contemporary twist. Vida Cantina was named Best of Taste’s “Best New Restaurant” when it opened in 2014, and its popularity and recognition continues to grow.

Vargas is very busy. He also chefs at two other Portsmouth restaurants, Dos Amigos Burritos and Jumpin’ Jay’s Fish Cafe, and is the co-founder with Anneke Jans’ Executive Chef Lee Frank of the Chefs After Dark Series.

Tell us about Casa Vargas. How did it influence you?
My parents taught me traditional Mexican cooking at a very young age. Casa Vargas was your typical taqueria, serving burritos, quesadillas, fresh tacos. I really didn’t realize what helping out at the restaurant was doing to me at the time. All of that food was just food that we ate on a daily basis at home. It was just something you did to help out, working both in the back and in the front of the house.

When I took over at Vida, my mom gave me all of the recipes from the restaurant. It was fun to go back and look through them, which then led to me using some of the techniques found in those recipes as a base for the menu items at Vida.

Family is your passion. Do you feel a sense of passion at work as well?
At Vida, it’s not just me in that kitchen; Vida is built around every single person that we have employed there. It’s a family atmosphere in our restaurant. I have so much that I am doing, I’m between three restaurants all the time. So, I rely on my staff to not only replicate what I want them to, but to also create more and more every single day. That’s why I say we are family. The future is Vida. Vida is family and our family is Vida. That’s our goal and our motto for 2016. Every single employee at Vida has so much to bring to the table. I think what we started off as and what we progressed to has been amazing in itself. And we continue to want to push what we can as a traditional Mexican regional cuisine. We are a Mexican style restaurant, we are not your traditional New England Mexican restaurant, but we try to push the word “modern” to the limit for sure, and to also see what we can get away with. We embrace traditional ﬂavors done with modern techniques.