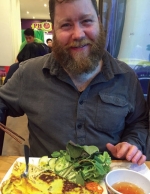 At ﬁrst glance, you might drive by without noticing STREET, which might suit locals in the know just ﬁne, as the restaurant has emerged as one of Portsmouth’s most popular eating destinations. Located in the back portion of a shopping plaza just a mile or so outside the Port City’s downtown, STREET features everything from falafel and pho to burgers and bibimbap. It’s owned by husband-and-wife team Josh Lanahan and Michelle Lozuaway. Lozuaway handles the front of the house, while Chef Lanahan is responsible for the kitchen.

What is the concept behind STREET?
The concept is street food from around the world—and not just food from carts or trucks. In Asian countries, for instance, the kitchens can be so tiny it’s more practical to eat at a counter in the middle of a market than to cook something like bibimbap at home. We stick to traditional recipes or concepts as much as possible but leave out things that Americans tend not to like: tripe and tendons in our Pho, chipotle mayonnaise instead of an entire chipotle pepper on the Cemita as they do in Puebla, Mexico.

How did you come up with this idea?
My wife Michelle and I have always had an interest in, and hankerings for, the more exotic, foreign foods unavailable in this area. Recently, we were in Paris and ate more Asian food than French. We ran a food truck starting in 2008 serving falafel, porchetta, and a few other internationally ﬂavored street food items. When the city of Portsmouth made it untenable to run the truck, we opened STREET and expanded on those types of dishes.

Have you always enjoyed cooking?
I’ve always been interested in and curious about food from a very early age—pretty sure I was born ravenous. I was making pancakes for my buddies when I was 7 or 8 years old. I was in the culinary program at Portsmouth High School and graduated from the Culinary Institute of America in 1996. I really like to eat and to please people—cooking allows me to do both in spades.

Do you change your menu often?
Not really. We try to run specials when we discover a new dish either by reading about it or traveling, but ours is not the kind of menu that is easily altered. One new dish added recently is Gobi 65, a gluten-free, tamarind-spiced fried cauliﬂower. We’re always looking for dishes that round out or encompass countries or ﬂavor proﬁles we don’t have.

What are your challenges?
I’m short. I can’t always reach the top shelves. Actually, our biggest challenge is space—the size of our kitchen and the amount of food we produce. We serve over 3,000 people per week. At any given time, we might have ﬁve cooks on the line, two dishwashers, and people prepping in the back. It’s very crowded. Another challenge is to-go orders, but when we open our next place we will have delivery for both, which will streamline that process.

Anything new on the horizon for STREET?
Yes. We’re expanding the brand to include STREET’za 360°, which will be on the front side of our same plaza. STREET’za 360° will likely have both New York and Sicilian style pizza as well as some more exotic pizzas like pide from Turkey and khachapuri from the country of Georgia. We’re planning a market with a STREET product line of sauces, rubs, and dressings and a large selection of prepared foods that I think will be welcomed by those who don’t want to cook but also don’t want to eat out. We’re also building an intimate bar, which will have dishes not found on STREET or STREET’za 360° menus.

NOTE: STREET'za 360° is now open! Check out their website or Facebook page for updates on expanding menu options, hours, and delivery service.