It’s not quite 4 p.m. on a Friday, and already the large, curving bar at Ron Jillian’s Italian Bar and Grill in Hampton is alive with regulars, who chat animatedly with each other and the staff as they relax with drinks after work. “This is actually pretty quiet,” says owner Ed Blouin, motioning over his shoulder at the lively afternoon crowd behind him.

After nearly three decades working as executive chef or general manager at locales like the Four Seasons Hotel in Boston, Ten Center Street in Newburyport, and the American Academy of Arts & Sciences in Cambridge, Blouin decided it was time to venture out on his own with his wife Rosemary. “This is a time when I should take a swing at this,” he remembers thinking. They bought Ron Jillian’s (named for the previous owner), and made it their own. Eight years later, Ron Jillian’s has become a hot spot for rustic Italian food in a fun, relaxed, and family-friendly environment. Rosemary Blouin manages the front of the house, welcoming guests as they enter. Working with Blouin in the kitchen is Executive Chef Craig Spinney. Together they bring years of experience to the eatery. Blouin says he and his top-notch staff pride themselves on consistency and high quality. “We feel very strongly about the quality of the product that we bring in, how we handle it, and how we present it,” he says.

That focus on quality and presentation is evident in dishes like the beautifully plated Caprese Salad, which features creamy, house-made mozzarella cheese and dollops of pesto, in addition to fresh basil, vine-ripened tomatoes, and balsamic vinegar. The Arugula Spinach Salad is another standout starter, thanks to the additions of spiced walnuts, goat cheese, slices of tender Chiantipoached pears, and a rich, flavorful balsamic vinaigrette. The entrees, which include classic Italian fare like Veal Parmigiana and Lasagna, seafood dishes, pasta, and pizza, are also as beautiful to look at as they are bursting with flavor. “My philosophy on food is, it should hit all the elements of your palate,” Blouin says. “That’s how you get nice, full flavors.”

A great example is the Pork Chop Marsala, a grilled organic boneless chop with earthy mushrooms in a sweet Marsala wine sauce, served over garlicky mashed potatoes. Mussels Bianco over Linguine features mussels steamed with white wine and butter, seasoned with oregano and parsley. Frutti di Mare is for seafood lovers, loaded with shrimp, scallops, calamari, and P.E.I. mussels. The flavors are complex in the pizzas, too, like the Venetian, a sauceless pie with artichokes, spinach, eggplant, and kalamata olives, and the pleasantly spicy Fire Extinguisher Special with pepperoni, cherry peppers, and roasted red peppers.

Drinks and desserts at Ron Jillian’s are decadent too, especially the impossibly creamy and rich Tiramisu, which pairs wonderfully with the Espressotini, a dessert-style martini made with vanilla vodka, Kahlua, Bailey’s, and a shot of freshly made espresso, garnished with three espresso beans. “It tastes like coffee ice cream,” says Lauren Osborne, front of the house and bar manager. “We use the real espresso so it doesn’t have that artificial flavor.” The Cran Apple Tini is a refreshing, fruity blend of cranberry vodka and juice plus Apple Pucker.

Although the food is great, and Ron Jillian’s has a devoted following, Blouin isn’t content to rest on his laurels. The restaurant has recently added The Vault, a 1920s-themed speakeasy downstairs, with a pool table, dart boards, tabletop shuffle board, and signature cocktails, plus the modern addition of big-screen TVs.

Whatever the venture or the dish, patrons can be sure that they’ll get the same friendly, high-quality experience at Ron Jillian’s. “We know our customers,” says Osborne. “I have their drink ready before they sit down.” 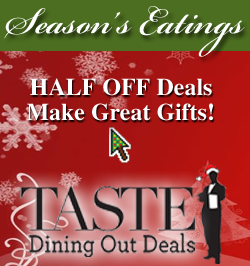