A LOT OF THOUGHT AND WORK goes into creating a restaurant menu. It must personify the restaurant’s philosophy and stay true to its mission. It should be varied enough to offer a little something for everyone. And, in the best of worlds, it reﬂects the creativity and inspiration of the chef at the helm. So, what are chefs looking forward to putting on their menus this season? We asked some of Portsmouth’s best chefs to reveal their favorite dishes. Here’s what’s cooking. 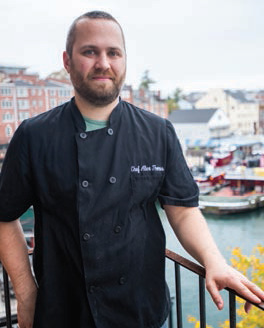 The executive chef at the intimate and award-winning Wellington Room likes to take it slow. That’s why Alex Thomas’s Bone-in Braised Short Rib, cooked for six to eight hours in red wine and blackberries, is one of his all-time favorite dishes. It’s the ﬁrst dish he put on the menu when he took command of The Wellington Room kitchen.

“We get the meat fork tender, falling off the bone, and then we take the leftover braising liquid and infuse it with more blackberries to make a demi sauce,” Thomas explains. It’s served with a slow-cooked, creamy polenta topped with a bit of zesty Parmesan cheese. During the winter season, he may change it up a bit and braise it with root vegetables and top it with a roasted pumpkin demi sauce; instead of polenta, it might be served with a squash hash. His favorite part of the dish?

“I think it’s the craving I get as I smell it slow cooking,” he says. “You get the aroma from the herbs, and then the roasted vegetables kick in, and then all of a sudden you can smell that deep, rich red wine. It’s amazing.” 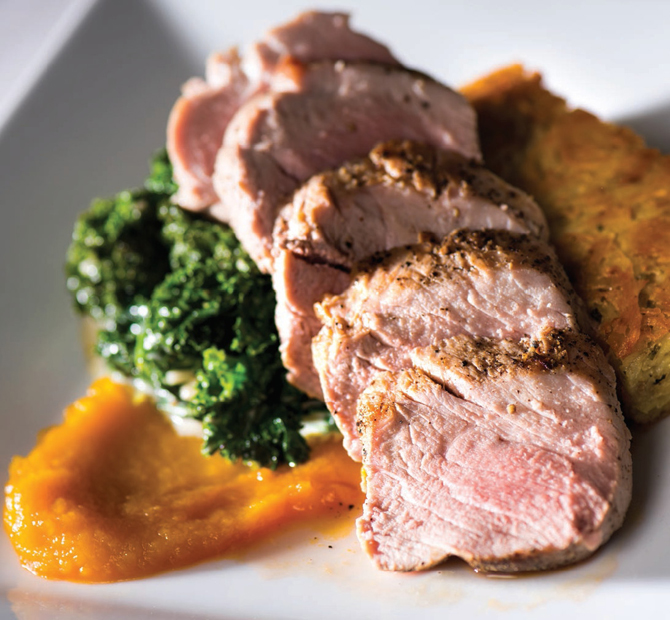 Thomas also likes his Brown Sugar Brined Pork Tenderloin, which is brined in a blend of brown sugar, salt, bay leaf, thyme, and black peppercorns for at least 24 hours, then air dried and pan seared. It’s a simple but elegant dish, topped with apricot-apple butter and served with a Yukon Gold potato rosti and creamed kale. “All the ﬂavors and textures go really well together and that’s why I like it a lot,” he explains. “You get sweetness from the pork and the apricot, but you also get sour notes from the apples. The creamed kale balances your palate out again, and then you get the nice crispy texture from the rosti and the sear.” 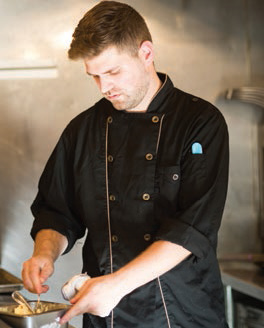 If the Bone-in Pork Chop is on the menu at Mombo, Executive Chef James Burnham wants you to consider it; it’s one of his favorites. The perfectly cooked, giant seared pork chop comes with a variety of seasonal sides, such as trufﬂed Yukon Gold potatoes or smoked root vegetables. “As far as meats go, it’s something that’s not the easiest to get right,” he says. “We use nice, fat chops and it’s a ﬁne line between getting them overdone or underdone. It’s a challenge, so when I get it perfect, it’s an accomplishment.”

The Crab Stuffed Arctic Char, topped with Avocado Arugula Puree and served with lentils and baby carrots sauteed in tarragon butter, is another favorite dish of Burnham’s. “It just works,” he says. Come winter, he likes to feature Braised Short Ribs, with his own creative preparation. “I want to try it with Guinness, and maybe serve it with a loaded baked potato, stuffed with onions and other things. It’s kind of a cross between traditional bangers and mash, but still a braised short rib.” 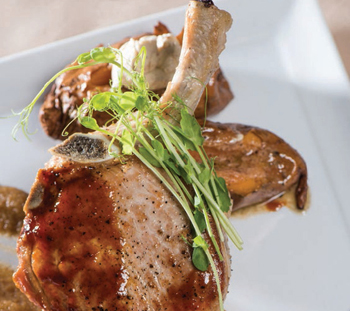 Taking a known dish and putting his own signature on it, changing it into something more reﬁned, is one of Burnham’s favorite things to do in the kitchen. “It’s how I come up with a decent amount of the menu,” Burnham says. “I take a dish that’s common and put our own twist on it.”

Burnham, who wanted to be a pastry chef when he was younger, also likes to incorporate baking techniques and sweet ﬂavors into his dishes. His baked Carrot Baklava features thinly sliced carrots doused with spices and wedged in between layers of phyllo dough. It’s ﬁnished off with a silky smooth carrot caramel sauce and served with roasted duck. Another favorite is the Beet Bread Pudding, with pumpernickel bread and beets, ﬂavored with oranges and cranberries, and topped with a pink peppercorn crème anglaise. “Baking is a challenge; it takes a lot of experimenting, and I rarely get it right the ﬁrst time,” he says. “I guess I have a love-hate relationship with it.”

When Chris MacDonald, the chef at the longstanding and beloved Dolphin Striker, was 13 years old, he made his ﬁrst crab-stuffed haddock, and it remains one of his favorite dishes. “It’s the epitome of Downeast cuisine,” MacDonald says. The Haddock Oscar he prepares today has evolved into something much more reﬁned, topped with a very lemony hollandaise and a nest of fried leek greens. It’s one of the most popular dishes on the menu. 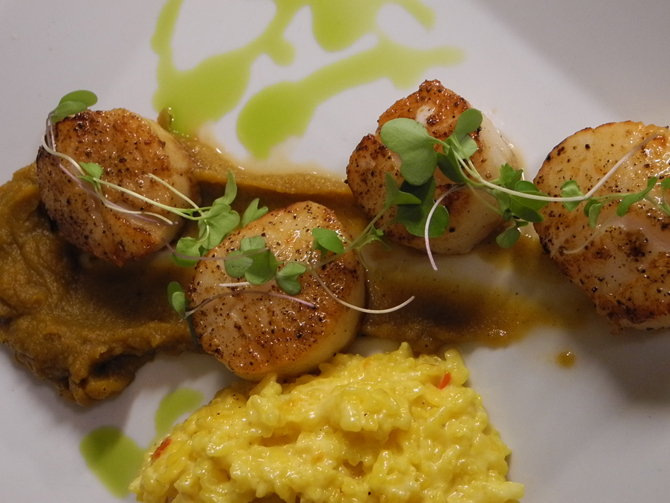 (Photo courtesy of dolphinstriker.com)
Another favorite, showcasing MacDonald’s love of spices and bright ﬂavors, is the Seared Scallops, served with creamy saffron risotto and a Moroccan squash puree seasoned with his own ras elhanout spice blend. “It’s a stylized dish with a lot of ﬂavor that speaks to what I like to do,” MacDonald says. “You taste it and you say, ‘oh my goodness, there’s so much going on here,’ but you can’t always pinpoint the ﬂavors. I love those ghost ﬂavors. It makes it more fun.”

The recently developed Jamaican Braised Pork dish also tops MacDonald’s list. He prepares traditional pulled pork, but instead of shredding it, he chills it and cuts it into big blocks, which he then deep fries. It’s served with mango-fennel slaw and a rum-based jerk glaze. “It’s crispy on the outside and super tender, and the bright ﬂavors are amazing,” he says. “It’s deﬁnitely a favorite of ours.”

MacDonald, who has traveled extensively to learn about other cuisines, incorporates Asian spices and ﬂavors into his house-made Ahi Poke, another of his favorites. The marinade for the tuna, which he reduces on the stove for six hours to develop deep ﬂavor, includes sugar, ginger, scallions, garlic, soy, sesame, and a lot of bonito ﬂakes. “We do a cucumber-wasabi spread and garnish it with fried lotus root,” he says. “It’s a pretty dish and showcases what I’ve been fortunate enough to see and learn on my travels.”

“I love to work with the big fall and winter ﬂavors,” says Derik Plaisted, chef at The District. One of his seasonal go-to dishes is Sweet Potato Gnocchi, served with a pancetta, sage, and cider gastrique. And the pasta is made fresh, of course, as Plaisted explains: “I grew up with an Italian grandmother!” 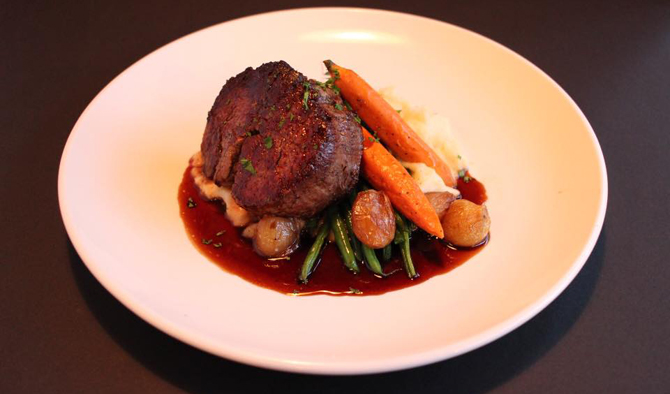 (Photo courtesy of Facebook)
His grandmother also shared her recipe for Cappelletti Soup. Plaisted’s version features a rich, hearty chicken broth, ﬁlled with house-made ravioli stuffed with cottage cheese and nutmeg. “I like to keep the ravioli a little on the lighter side because the broth is really heavy,” he says.

When the weather cools, Braised Short Ribs will go on the menu. Plaisted braises the ribs for eight-plus hours in a homemade barbecue sauce that includes maple syrup and bacon, until they are super tender. “I’m thinking of serving them shredded on top of sweet potato pancakes,” he says.

Desserts are also part of Plaisted’s culinary skills. “I like baking because it takes patience and precision,” he says. “It brings me back to the technical aspects of cooking.” One of his favorite winter season desserts is a Pumpkin Sponge Cake, with cream cheese frosting. “It’s another great family recipe.”

Morrgan Machado, chef at Rudi’s, is quick to name his favorite dishes. “I have a really interesting salmon preparation,” he says. His popular Pan-Seared Salmon is served with pine nuts, grapes, and Swiss chard that’s been wilted with pancetta and pancetta fat in a sherry vinegar reduction. “It’s an interesting ﬂavor proﬁle,” Machado says. “It’s sweet and salty with the grapes and pancetta, and the Swiss chard replaces the starch on the plate, which makes it a lighter dish.” 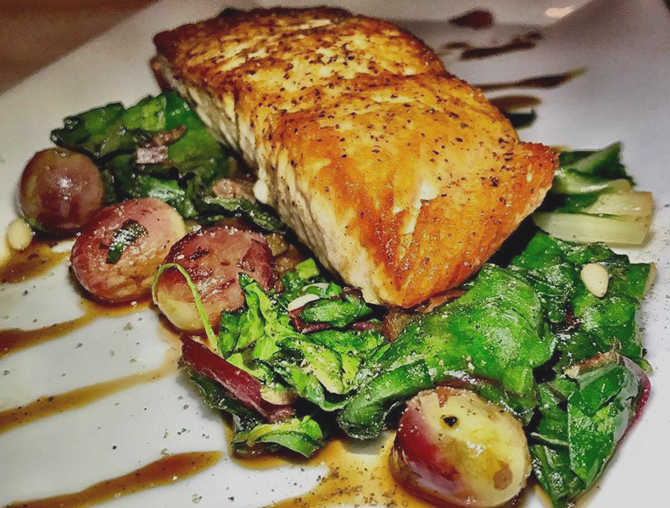 (Photo courtesy of Facebook)
Second on his list is Roasted Rack of Lamb, served with salt-roasted red potatoes, spinach, and a mint gremolata, made with rough-chopped parsley, mint, lime zest, and olive oil. “Remember mint jelly? This is my riff on that,” he says. “It’s a nice light, bright accompaniment to the richness of the lamb but still offers the classic taste of the mint.”

Machado uses some of his preferred ingredients in his Pan-Roasted Duck Breast, including pumpkin, port wine, and pecans. “I’m a big fan of nuts. I think they add a lot of personality,” he says. “And pumpkins and pecans are great friends.”

Machado is also thinking of incorporating what his Italian grandmother always made during the holidays: Zeppoles. He makes these little Italian doughnuts with ricotta and serves them with salted caramel. Buon appetito!