For a town once prominent enough to mark pre-Revolutionary maps of America, Kingston exudes a sense of staunch preservation—in the best, most New England way possible. But at Rick’s Food & Spirits, small-town charm and New-Age fare are anything but mutually exclusive.

Opened in early 2016 along Kingston’s quaint Main Street greenway, Rick’s wears its tavern heart squarely on its sleeve: wood floors and tables sourced onsite from an old barn out back, a charming new function room tailor-made for holiday gatherings, a wait staff as quick with smiles as menu recommendations. Modern flares abound, however, typified by the restaurant’s blue-lit bar and myriad TVs. Whether you’re watching the Pats or sharing stories with old friends, Rick’s welcomes you with open arms. 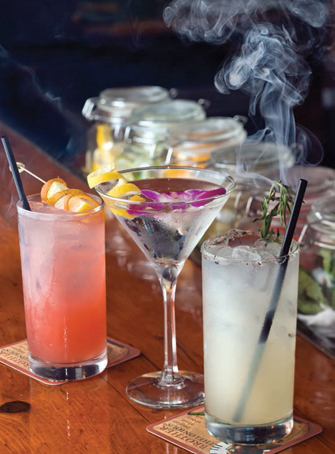 Save room by holding off on beer (at least briefly) in lieu of a craft cocktail. The sophisticated Vesper martini has well-chilled Ketel One vodka, Hendricks gin, and Lillet Blonde garnished with a lemon twist. For the more sweet-and-sour leaning, try Ambers Italian Greyhound, served in an iced Collins glass and featuring Vermont White Vodka, Aperol, peach bitters, and grapefruit juice. A rosemary sprig garnishes the tequila-based Ragnarok, blended with green grape and honey mead. And on the beer front, Rick’s focuses almost exclusively on New England brewers (including Stoneface and Newburyport Brewing Company).

The menu at Rick’s changes frequently, taking into account seasonality. Many items we tried on a recent visit might not be around in a month or so, but may be back when the weather changes again. While the appetizer menu favors familiar hits like Shrimp Cocktail and Oysters on the Half, it’s in the B-side riffs that Rick’s really finds its groove. A beef Carpaccio is served filo-thin and dressed with capers, red onion, olive oil, and a dusting of Parmesan. The brine is inescapable, but it’s the gamey richness of the tenderloin, fresh and mouth-meltingly rare, that truly lingers. On the deep-fried front, if it’s on the menu, try Kim’s Buffalo Chicken Rangoons. A quartet of crispy pockets filled with zesty shredded chicken, tzatziki sauce on the side (trust us, it works) deftly navigates three very different culinary traditions. Which, if you ask the man himself, is all in a day’s prep work. 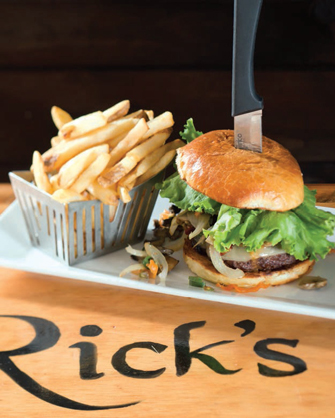 “There are a lot of great restaurants around here that put out really good food,” says namesake and Chef-owner Rick Korn. “So we knew the bar was high. What we’re trying to do is shake things up a bit, and bring in some different flavors and ideas maybe people haven’t seen before.

”The Buffalo heat in the rangoons prepares us well for the more blistering bites to come. Blanketed in a trio of hot peppers (jalapeño, habanero, chipotle) and dashed with Rick’s homemade “insane sauce,” Benny’s Hotter Than Hell Burger won’t be accused of false advertising. Between the airy brioche and local over-easy egg topper, though, there’s plenty of substance to temper the incendiary style. Even for someone who seldom orders higher than a two when eating Thai, I’d walk Benny’s coals again in a racing heartbeat. No wonder it’s one of the few menu items Korn deems to be a menu essential. 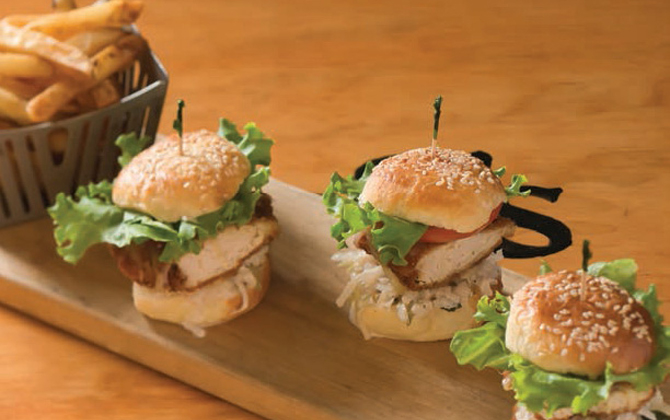 Wary of committing to just one burger? Rick’s Twin Sliders makes playing the field feel like a noble cause. And with an array of patties to choose from (including salmon, lobster, fried haddock, short rib, and beef), getting bored is the least of your concerns. The Frosted Flake Crusted Fried Chicken Sliders with chipotle barbecue sauce somehow tastes even better than it sounds. Bulk it up with a third slider and a basket of Hand Cut French Fries.

For entrees, we try the positively decadent Seared Sea Scallops. Preparations change; ours were pillowed atop mini crab-and-lobster cakes, drizzled with lobster sauce, and paired with grilled-salmon rice. For the staunch seafood evangelist, this is damn near gospel on a plate. A scale-busting portion of Slow Braised Short Rib (braised in coffee porter) flanks Parmesan and wild mushroom risotto, with julienned vegetables adding a delightful crunch. 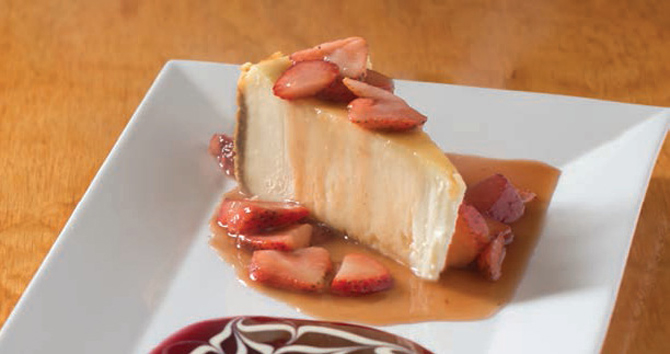 Sweet endings vary, but might include a Deep Fried Peanut Butter Cup (homemade), creamy Strawberry Cheesecake, or a creatively flavored Whoopie Pie. Worth taking home if you don’t quite have room after the filling meal.

If Rick’s is your destination, rest assured the journey will be more than worth it.