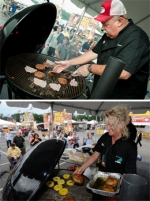 Fire up the grill! Burgers and ribs, pulled pork and chicken were at the center of the finger-lickin’ festivities at Mohegan Sun’s first Sun BBQ Fest, held this past June 1-3. The weekend’s rain did little to dampen the enthusiastic crowd, who lined up to sample award-winning fare from vendors like Amarillo-based Texas Thunder BBQ and South Carolina’s Charleston’s Big Boned BBQ.

A highlight of the festivities was the rib-eating contest, emceed by Mike Petit of NESN’s Grillseekers, which featured famed competitive eater Joey “Jaws” Chestnut. Chestnut took the competition with his rib-spinning, water-guzzling technique that left his competition in the BBQ-sauce spangled dust. As Petit declared, “The ribs are cooked, but the emotions are raw.”

Food demos from chefs around the country also taught attendees a thing or two about becoming grill masters themselves. During one demo, Mike Davis of Lotta Bull BBQ showed off his Bulldacious Burger: a thick hamburger spiked with chipotle and adobo sauce, with cheese, grilled pineapple, thinly sliced ham, red onions, and a sunny-side up egg. “That’s the thing about building a burger,” he drawled from under the brim of a Lotta Bull BBQ trucker hat. “It’s whatever you want.”

The Bulldacious Burger
Makes about 10 ¼-pound burgers.
Make Davis is a successful competitive barbecuer – it’s become a full-time occupation, and he travels around the country competing (and often winning) with his wife and grill partner Debbie Davis. He served these spicy burgers at the recent Mohegan Sun BBQ Fest. Mike’s original recipe makes twice as much, so the recipe can easily be doubled. The burgers are great grilled, but they may also be cooked in a skillet.

1. Preheat grill.
2. Place ground round in a large bowl. Add chipotle and adobo to a food processor or blender and blend until pureed. Add to the meat and mix thoroughly. Form into thick patties.
3. Grill burgers on a grill to medium doneness.
4. Have buns open on plates. Place a slice of cheese on the bottom half of each bun. When the burgers are done, place them on the cheese. Top with BBQ sauce.
5. Grill the slices of pineapple, ham, and onions, just to warm and create grill marks on either side. If needed, brush the pineapple and onions with vegetable oil.
6. Add a small amount of oil to a large nonstick skillet. Fry eggs sunny-side up, 2 or 3 at a time. Place fried eggs on top of the burgers.
7. On the top bun, put onion, ham, and pineapple. Serve open face.