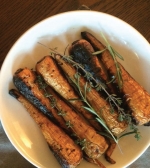 Conﬁt is a generic term for foods that have been cooked very slowly in some kind of fat. Most commonly conﬁt involves duck leg quarters. Here, Chef Brendan Vesey of The Joinery makes the most of sweet Seacoast parsnips using this process.

He then roasts the conﬁt parsnips to a golden color to order.

Adapted from Brendan Vesey of The Joinery

Note: The oil used for baking the parsnips can be strained and stored in the refrigerator and used in dishes calling for an herb oil.

1. Preheat oven to 250°F. Have ready a baking pan just large enough to hold the parsnips.
2. Scrub parsnips clean of all dirt. Spread the parsnips in an even layer in the pan. Add thyme, rosemary, and garlic. Sprinkle with salt. Pour oil over the parsnips and herbs so that the vegetables are completely covered.
3. Bake until parsnips are tender, about 2 to 4 hours. Remove pan from the oven and allow conﬁt to cool completely before storing it in the refrigerator.
4. To serve, pull the parsnips from the oil. Either saute or roast them until they are caramelized and serve.