Dennis Belleville of Carl’s Meat Market in Kittery, Maine, remembers the first box of beef that came into the store. It was around 1979, when the shop was on Government Street. He recalls there being probably seven meat cutters standing around. Staring at it. Poking it. Opening the cardboard first, and then the plastic bag inside. All the pieces were the same. “It was space age meat to us at the time,” he says.

At that point in his career, Belleville had been breaking down 300-pound sides of beef into steaks, roasts, stew meat, and ground beef for Carl’s Meat Market customers for almost a decade. Belleville waxes nostalgic about the meat he used to carve himself, about the flavor, the texture, the marbling. He’s very quick to point to the beef stacked in stainless steel pans in Carl’s case as being both high quality and very delicious. But he laments no longer having easy access to his favorite custom cut, a bone-in sirloin strip called a club steak.

Where’s the Cow?
Carl’s and other Seacoast purveyors like Joe’s Meat Shoppe in North Hampton, New Hampshire, and Seacoast Butcher Shop in York, Maine, offer a variety of smaller whole animals. You’ll find fresh chickens, frozen ducks and rabbits, and, on request, pigs and lambs. But sides of beef are difficult to obtain unless working directly with a farmer. Plus, they require scads of storage space and knife skills and familiarity with animal musculature to butcher them properly.

Jarrod Spangler has managed all of the finer points of handling a side of beef. In this era of up-close-and-personal encounters with food from the source, heads turn every time one gets slapped down on the butcher’s table inside Maine Meat, Spangler’s shop in Kittery Foreside.

Whole animal butchery is the once traditional process of cutting, selling, and using all parts of an animal in its natural proportions. One animal is used and all parts sold before butchering the next animal. A resurgence of this approach in the Seacoast region is driving sales of locally reared meat, compelling chefs to be creative with both their boning knives and their menus. Local farmers are rebuilding customer relationships and distribution channels lost in the wake of boxed meat. And diners can now expect a lot more than tenderloin when they go out to dinner. 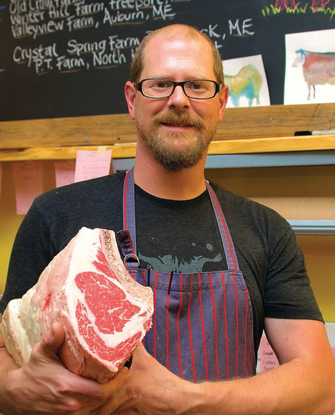 Spangler is tall, bespectacled, and bearded; he wears a aluminum butcher’s knife holster low on his hips with the help of a heavy gauged metal chain. He receives as many as five sides of beef, five whole pigs, three whole lambs, and 90 whole chickens per week from farms located within 100 miles of the shop. It is his mission to make the vital connection between area meat farmers and the community that consumes the animals they’ve raised for food.

After attending the Culinary Institute of America, Spangler honed his lamb butchery skills during a stint in a San Francisco restaurant. He learned about beef musculature from a pair of butchering brothers in the Italian Alps. Pork cutting he acquired locally, at the Pepperland Cafe in South Berwick (now the location of Thistle Pig). In June 2014, Spangler and partner Shannon Hill (their first date comprised brunch and a quick side trip to pick up half a hog), with the help of a $50,000 Kickstarter campaign, opened Maine Meat. Business is booming. Spangler currently employs two apprentices and Hill says they get three to five inquiries every month from people looking to learn the art of butchery.

Encouraging Flexibility
Spangler estimates he spends half his time actually butchering the carcasses that pass over his long, maple cutting table. He gladly spends the other half educating customers regarding the unique cuts, and the inherent cost, of the meat in his case. Those products include things like dry-aged ground beef (made from the trimmings of the ribeyes and short loins Spangler hangs and ages for 30 days), ranch steaks, house-cured slab bacon, cross-cut shanks, Frenched lamb chops, smoked pork chops, a house-made sausage called “Delicious,” and even Belleville’s beloved cut, the club steak.

“I can see the frustration on a customer’s face when they come in with a skirt steak recipe that calls for three pounds of meat. Well, since a whole skirt steak weighs only about one pound, that recipe would require all the skirt steak I’d cut that week. If I’ve already sold two of them, there’s no more until the next animal comes in,” Spangler says. But he doesn’t let customer frustration throw him; he sees it as a challenge. “I’ve learned to keep them engaged so that I have time to figure out what they see as the end result for the recipe, and talk them into accepting my alternative cut.” 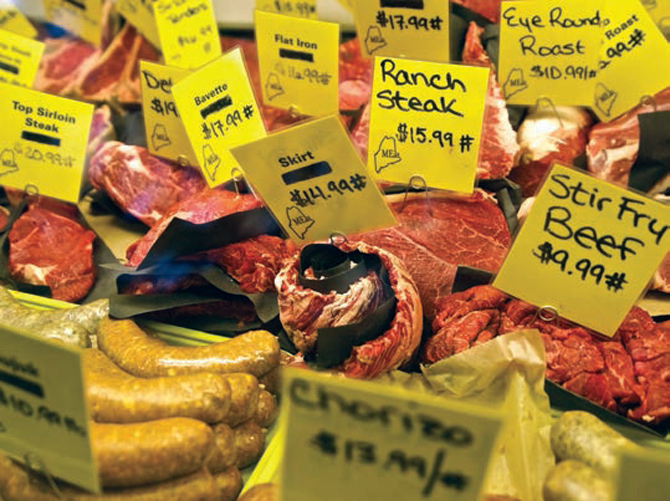 He’s good at what he does. During a two-hour span on a Wednesday morning in May, a customer came in for calf’s liver the store didn’t have and left with a half-pound of lamb’s liver instead. Spangler had a lively discussion with another patron on how to best marinate and grill chicken hearts. He explained to two uniformed guys from the Portsmouth Naval Shipyard who came in for the sandwich of the day (an Italian sub) why a spatchcock chicken was a relatively quick-cooking option. (This involves partially deboning a whole chicken, flattening it, and roasting it.) And he charmed a first-time customer who came in looking for a cut that would make enough slow-cooker pulled pork to feed her family of four for dinner that night.

“I’ve got the perfect shoulder for you right here. I haven’t even labeled it yet because I was saving it for you,” Spangler told her. She took all four pounds, commenting that leftovers are always a good thing.

Chefs Embrace Wholeness
Lured by the quality of local meat and enticed by the option of breaking it down into a manageable food cost proposition, Seacoast chefs are supporting whole animal butchery in a number of ways. Some purchase the animal directly from the farmer once it’s been slaughtered and butcher it themselves. Some submit specifications on how they want it cut to the farmer’s processor. Others buy into whole animal programs run by local product clearinghouses like Native Maine Produce and Specialty Foods in Westbrook, Maine, where the company’s resident chef Jeff Landry makes sure restaurant chefs get the cuts they want and that all parts of the animal will be used.

Lisa Webster, owner of North Star Sheep Farm in Windham, Maine, sells her lamb only to chefs who buy into a whole animal program because she believes that is the only way she can scale her business to meet future demand for local lamb. “I sell animals on the hoof. Not meat in a box. And the chefs I work with are willing to get creative with all cuts,” Webster says.

Justin Shoults, executive chef at Brine in Newburyport, contends North Star lamb is the best he’s worked with in his career. Beyond the quality, receiving whole lambs and hogs ensures their freshness, plus the kitchen staff gets excited about the culinary possibilities so that no part of the animal goes to waste. And it gives servers an interesting tableside story to sell. Shoults notes that it all adds up “to give the plates more value.”

Whole animal consumption and butchery is second nature to chefs Ben Hasty of Thistle Pig in South Berwick and Justin Walker of Earth at Hidden Pond in Kennebunkport. “The fancy cuts were for Christmas, and we ate everything else that was in the freezer the rest of the year,” says Hasty. He grew up on nearby Breezy Hill Farm, still owned by his dad, Tom, who supplies Ben with all his restaurant’s beef and pork. 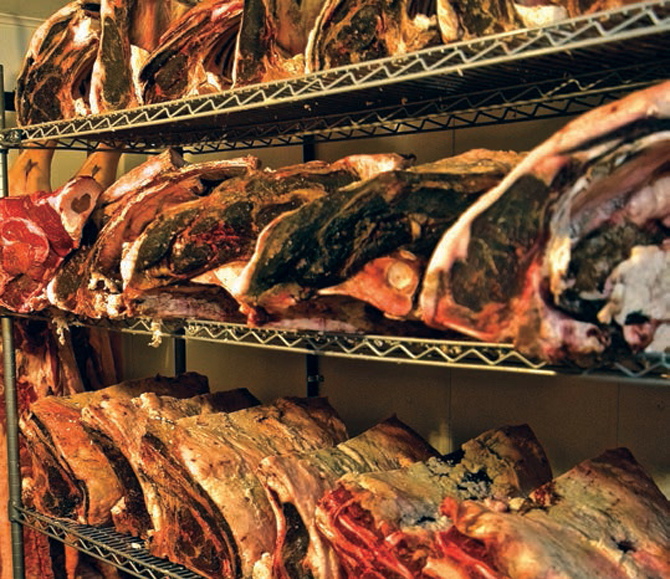 When the younger Hasty first opened Thistle Pig in March 2014, he butchered a whole pig about once a month. But as business grew, space in his kitchen and demands on his time no longer allowed him that luxury. Hasty now buys three pigs a month from his dad and has Sanford Butcher Shop break them down to his own specifications. Days before his pork delivery, Hasty organizes his kitchen to prepare for “pig day.” This advanced prep means his staff can efficiently turn the butchered pig into the charcuterie items the restaurant is known for.

Walker learned his butchering skills during upstate New York hunting trips with his father when he was growing up. “Breaking down what you shot was part of the deal,” he says. His challenge with whole animals at Earth is not one of technique, but of having enough of a single protein to make it through dinner service, which on a busy night could be as many as 240 customers. Walker and his staff butcher whole lambs, goats, veal calves, pigs, and chickens.

“You learn to save enough of one cut so that you can create a special dish with it and not run out too early in the night,” Walker explains. For example, chicken oysters, the two small, oyster-shaped pieces of dark meat that lie on either side of a chicken’s backbone, which Walker argues are the best part of the bird. He saved all the chicken oysters from a week of busy summer service and ran those as a weekend special.

Logistics limit the extent to which Earth can use whole animal options. They do not butcher or grind the beef for the popular burger and bar meatballs on the menu. For the volume they serve, Walker says, “We’d need a dump truck full of sides of beef,” and the time and effort required would be cost prohibitive.

Chef Matt Louis of Moxy and Franklin Oyster House in Portsmouth butchers everything but beef and shares the spoils of the chopping block between both restaurants. He argues that mixing and matching of house butchered meat doesn’t have to stop at the distribution stage, it can continue into the kitchen. For example, pigs and ducks come to the kitchen with a lot of fat attached. That fat can be rendered to help cook leaner whole animals like rabbits (a confit is regularly on Moxy’s bar menu) and goat (like in a posole style stew at the Franklin Oyster House). “This whole animal thing simply just runs full circle if you let it,” Louis says.