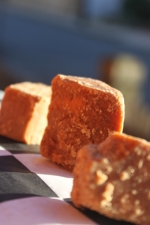 Fudge shops and coastal locales seem to go hand-in-hand. And most seaside fudge I’ve tried is, well, fine. Roly’s English Fudge ($13/pound) is in a class by itself. It’s slightly dry, yet still has a creaminess, packed with buttery caramelized flavor that keeps you nibbling away.

Roly’s is a branch of a chain of fudge shops in Great Britain, brought to us by Mike and Peggy Bristow. The couple retired in 2006 from the aviation field. “We decided we wanted to do something together,” says Mike. “We happened to think about the fudge business, and we went in search of the best fudge we could find, and it happened to be in England.”

The Bristows tasted all kinds of fudge, but realized they were on to something when they tried the crumbly confection from Devon. “Historically, fudge in this country has developed into being a soft, mushy consistency,” Mike asserts. “Roly’s is a throwback to fudge that was originally made before corn syrup was invented. I theorize they started using corn syrup because it’s cheaper and more forgiving.”

Roly’s has no corn syrup, just sugar, butter, milk, and other wholesome goodies. There are at least 10 flavors, with various specials, but, Mike says, “we probably sell more Roly’s Original than the rest of them combined.” When they opened, they called this flavor what it’s called in England: Vanilla Clotted Cream. “That name didn’t work,” Mike laughs. But if you’ve ever had clotted cream, a thick, sweet cream the texture of mascarpone with the taste of whipped cream often served with scones at teatime, then you can see the appeal.

Still, the Cadbury Chocolate is delicious as well, as is the Dark and Stormy, a flavor the Bristows created as a nod to Bermuda, where they like to travel. It’s made with rum and Chinese ginger.

The Bristows searched high and low for the optimal location, and first opened in Kennebunkport. In 2009 they sold that store and opened in Portsmouth. You can order Roly’s fudge online – but if you stop by the shop, you can also try the refreshing Gelato Fiasco from Brunswick, Maine.