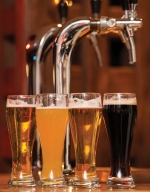 The number of breweries in the United States has grown faster in the past few years than anytime in history. Every day a handful of bootstrapping entrepreneur with big dreams brew, package, and distribute their creative passions in a bottle, can, or keg with the ultimate goal of getting someone to try it. Without the benefits of big-budget mass marketing, craft breweries rely on word-ofmouth and the grass-roots approach to gaining popularity. As beer lovers know, when we try something we like, we’re happy to spread the word.

Fortunately, more and more bars and restaurants are expanding their beer menus to include more than just mainstream offerings. Knowing the first rule of business (“The customer is always right”), several local establishments have stepped up their game to help beer drinkers experience options from every coast by offering more varieties of beer, more local beers, and of course, more beers on tap.

The first Rí Rá pub opened in Charlotte, North Carolina, in 1997. Today there are an even dozen around the country. In March of 2009, Rí Rá Portsmouth opened with 16 draft lines featuring a wide variety of imported and local craft beers. “We have a very diverse clientele base—just the way an Irish pub should be,” says General Manager David Nyhan. “With the large selection of drafts we carry, there is a flavor for everyone to sample from.”
Deciding which beers to include on tap is an ongoing decision for Nyhan, a true beer lover. The options are split evenly between imported and American craft beers. There are certain staples you will always find at his location, including Guinness, Harp, and Smithwicks. As for local flair, “I love Smuttynose Big Beer Series because it changes every six weeks to another great style,” Nyhan says. “Switchback Ale from Vermont is always on draft. It’s the first craft beer I started drinking when I came to Vermont from Ireland.
It’s also a staff favorite.” One of Nyhan’s primary goals is to always “keep it fresh” for his customers. “Seasonal beers are great as they change on a regular basis so you’re not stuck with the same line up every month,” he says. A rotating draft line, some of which are chosen by the staff based on customer feedback, also adds variety. “We are always trying new beers and if they sell well, we’ll add them to the mix.” The Pub Club offers customers a chance to not only try every beer Rí Rá has to offer, but also to have their names inscribed on a plaque at the restaurant. “I love this because it encourages people to try beers they may never have tried and get a better understanding of different style and flavors,” Nyhan says. “You may even find your next new favorite must-have beer.”

The first Black Cow Tap & Grill was established nearly two decades ago in Hamilton, Massachusetts. Its owners recently opened a second location on the waterfront in Newburyport.
Owner Joe Leone always offered a large selection of draft beers. “The original Black Cow location had 24 beers on tap, which was very unique 20 years ago,” says General Manager Mike Duratti. “And we just expanded the line-up to include nine additional draft lines.” The Newburyport location features 20 hand-picked varieties. Both bars offer a few of the world’s better-known draft selections, such as Guinness, Stella Artois, and Hoegaarden, but, as Duratti points out, the old standard of what consumers want to see on draft has dramatically changed. “We definitely have more pale ales and India Pale Ales (IPA) on tap because of the demand,” he says.
“However, we try not to duplicate beers from the same brewery just to have a wider variety; there are so many great beer choices to choose from. We also like to feature as many local breweries as possible.” It’s what keeps people coming back to the restaurant on a regular basis. “Our clientele is attracted to the beer selection, it’s one of many reasons that they visit our restaurants.”
Duratti makes sure employees are well informed. “We educate our staff with written materials, conversation, and offer them the opportunity to taste any of the beers that we may add to our line-up so they can speak confidently to the customer,” he says. He also makes certain to maintain the integrity of each beer by consistently and strategically monitoring sales. “The slowest moving beer will be switched out for something new and exciting. We offer many seasonal selections and always keep an eye on all our tap lines to ensure that they are being poured in a fashion that would make any brewer happy.”

Thirsty Moose Tap House
21 Congress Street
Portsmouth, N.H.
603-427-8645
“We have 166 taps between the three bars,” says Joe Kelly, owner and visionary of Thirsty Moose Tap House in downtown Portsmouth, which opened last July. The upstairs bar was first to open, followed by the downstairs events area, which caters to anyone looking for great live music, private parties, and more of a lounge atmosphere.
Kelly, a serial entrepreneur, had the idea for this concept after a trip to California and a visit to the well-established Yardhouse. “I truly expected someone else to build this type of restaurant sooner,” he says. “Portsmouth is the best town in the area to live, work, and own a business. Fortunately, the timing was right and we secured an awesome space.”
With the amount of beers on tap at the restaurant and the explosion of interest in craft beer, Kelly is quick to point out that it’s the combination of atmosphere, food, and beer that bring the customers back. However, he does give extra credit to the beer. “The large selection allows us to draw the craft beer drinker and the average consumer. We offer everything from Bud Light to North Coast Old Rasputin Russian Imperial Stout. We don’t want to alienate anyone.”
To help facilitate this, The “Moose” (as it has become affectionately known to locals) offers sample paddles, which encourage customers to try something new every time they visit. While any attention paid to a global conglomerate macro-brewer may offend the hardcore craft beer drinker, the selection of beers at the bar is constantly evolving, as local breweries discover new recipes and breweries from afar ship their beers to New Hampshire. “We are definitely loyal to vendors that work closely with us, but we do not keep beers on tap that sell slowly,” says Kelly. “We are always willing to try something new and I like to keep the beer forever rotating.”
And he thinks there is room to grow. “Craft beer is huge right now, but it has a long way to go on the East Coast in comparison to the West Coast. We will most likely add 10 to 20 draft lines at a time, and we can easily accommodate 50 more.”