New Brews on the Block

Ever-growing craft breweries show no sign of slowing down

With the number of breweries in New Hampshire tripling in the past ﬁve years—there are currently more than 50—the Seacoast continues to serve as the proverbial gateway to the state’s craft beer revolution. “What people are starting to realize more and more is that they don’t need to drive for hours and wait in line all day to drink world-class craft beer,” says Ryan Maiola, marketing director of the Henniker Brewing Company. “We now have breweries in our own backyard in New Hampshire that are producing some of the best beer in the country.”

We spoke with several newer brewers that continue to expand the creative horizons of micro- and nanobreweries, building on a long history of independent beer making in the region. 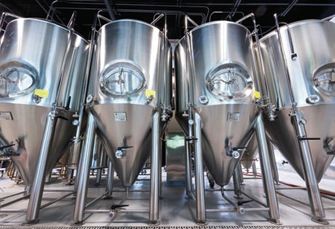 Jeff Gray of Bad Lab Beer Co., which just opened in Somersworth last fall, says the Seacoast’s love affair with beer dates back more than 150 years. In 1858, Frank Jones became partners with John Swindell to form what would eventually become the Frank Jones Brewing Company in Portsmouth and the largest ale producer in the country by 1882. “With this rich history and heritage and so many top-of-the-line and popular breweries now in the area, the region has no shortage of high-quality liquid,” Gray says. “We are excited to be part of it.”

Hopping Along
"Hops are king,” Maiola says. “People keep waiting for it to slow down, but the IPA train continues to roll along.”

Fully embracing the hankering for hops, Gray agrees, and describes their beers as hop forward. “Strong, aromatic, hoppy nose to long, hoppy, lingering ﬁnish are our thing.” Their initial beer lineup included a Session IPA, Pale Ale, IPA, and a Double IPA. “We aren’t afraid to challenge our audience and their stomach and taste for a bolder beer,” he says. “Every beer we produce will be loaded with the boldest ingredients, and some have undergone experimental brewing techniques.” 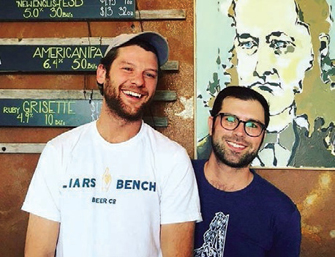 Fellow newcomer Liars’ Bench Beer Co. in Portsmouth is also celebrating hops. In terms of what is “hopping” at their establishment, Sweet As has a mix of U.S. and New Zealand hops. Co-owner and brewer Dane Nielsen also mentions the John Grady Kolsch, which he describes as their ﬂagship beer. “It’s named after one of our favorite literary protagonists, John Grady Cole, from Cormac McCarthy’s novel, All the Pretty Horses,” he explains.

Breaking the Mold
That said, hops aren’t the only trend in beers. While Nielsen believes that hoppy beers will continue to maintain their popularity, he says he also thinks there is room in the market for striking a balance. “At Liars’ Bench, I’m not against the hops, but I’m all for a more balanced approach with it,” he says.

Maiola says sour ales may be the next beer obsession and cites Henniker’s experience as possible proof. Released for the ﬁrst time last June, their summer seasonal dry-hopped sour ale, Sour Flower, has been their fastest-selling beer. “We took a chance releasing a sour ale when you didn’t see a lot of locally produced sours out in the market, particularly in New Hampshire,” he says. “It was a style we really enjoyed, though, so we decided to go for it.”

According to Maiola, the key to any craft brewer’s success is educating the consumer. “We want to get them to try new styles and push them outside of their comfort zone,” he says. “That’s what we did with our Sour Flower.” Noting they are very pleased with “the overwhelming positive feedback” they have received, he believes more sour ales will soon be introduced. “It’s such a different style versus everything else on the market, and there’s so much variation within the style,” he says.

Henniker’s critically acclaimed King Misanthrope, a Russian Imperial Stout, is brewed using staves of house-toasted maple wood, then aged in whiskey barrels from Flag Hill Distillery in Lee. It’s the most sought after of the four beers in their Off the Grid series. “We only brew one 15-barrel batch per year, which is distributed out over three states, so it sells out extremely fast,” Maiola says.

The ultimate German beer celebration of Oktoberfest inspires many brewers. Liars’ Bench has a German-rooted Crown Prince Ludwig, made with smoked barley. 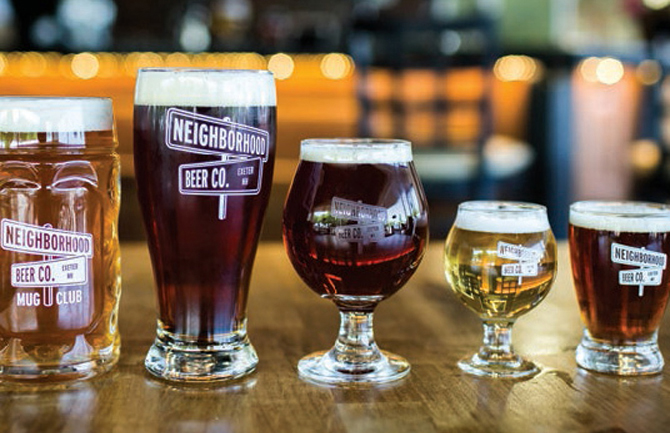 Neighborhood Beer Co. in Exeter is all about German beer. Co-owner Mike O’Donnell of marketing and sales says they brew classic German beers with an American twist. “Being unique allows us to create innovative and fun beer styles that most Americans haven’t fully experienced yet,” he says. “These German beer styles are not the norm in these parts due to the complexity involved in ingredients, equipment, processes, and expertise.”

He says they have also become well known for their two-word beer names. The second word is a noun loosely related to a neighborhood, while the ﬁrst word is a descriptor that does not necessarily relate to it but ultimately describes the essence of the beer style itself. “Our hope is that our names provide personality, description, and differentiation to all the styles,” says O’Donnell,who notes some of their favorite beer names include Boss Flamingo,Trophy Mutt, and Forbidden Firecracker. “The taste is full of just asmuch character as their names,” he laughs.

Space Savor
A big part of the craft brew experience is the environment in which the beers are enjoyed. And we have our share of great pubs and restaurants with extensive lines of local beers on tap. But there’s something unique about experiencing the beer on its home turf. Liar’s Bench is more than a ﬁll-your-growler-and-go sort of establishment. The revamped plumbing supply warehouse invites you to sit and stay a while. “Having a space like this makes the consumer feel that much more connected to what they are drinking,” Nielsen says. “We brew the beer and are the ones pouring it as well. People can ask us questions, too, so it helps create a more full experience. It’s different than going to a restaurant and drinking a beer. This is a place where you can sit down and enjoy a few beers—we don’t have any ‘slam you over the face beers’ that won’t let you ﬁnish that story.”

Pop into Bad Lab and you get a whiff of their question-authority attitude, starting with the “No miracles here” sign on the door.

Maiola describes Henniker Brewing Company as “a blue-collar brewery.” They’re committed to creating what feels right rather than chasing trends. “We brew beers we believe in and enjoy drinking,” he says. “When you stop by the brewery and grab a ﬂight of the six beers we have on tap, you will get a wide range of colors, ﬂavors, and aromatics.”

Neighborhood Beer has a spacious tasting room. The bar area is in one corner, made from reclaimed doors with a stone top. Flights of beers are served in custom-made paddles that neatly hold a quartet of what’s on tap. You also might catch a glimpse of their four-vessel German brewing system.

Citing their own success in the past year, O’Donnell says he also sees room for brewers who tend to work against larger trends.“

What we’ve seen is that people enjoy great beer—it’s a pretty simple formula,” he says. Another important factor behind the craft beer explosion in New Hampshire—and what will continue to drive its growth in the future—is the general nature of the greater Seacoast brewing fraternity. “There is a sense of cooperative competition, and it is very rare and refreshing to work together to share ideas, ingredients, and lessons learned,” he says. “It’s a great time to be a brewer.”

SIX PACK
More newer brewers on the Seacoast worth checking out.