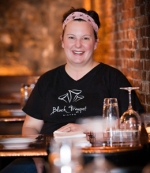 From homemade bread to seasonal desserts, having a dedicated pastry chef is a way for a restaurant to leave a delicious first and last impression on diners, says Lauren Crosby, pastry chef at Black Trumpet. The much-lauded Portsmouth hotspot is a favorite of diners who want to experience the restaurant’s innovative cuisine, and thanks to Crosby, dessert lives up to that reputation.

Crosby, 30, says she’s inspired by reading, traveling, dining, and seasonal ingredients. She likes to feature unexpected desserts, and specializes in offering “a different combination of flavors as well as a combination of traditional sweets presented in a new way.” She uses savory ingredients in desserts, as in dishes like her Avocado Lime Tartlette with coconut crust and berries, and in the Sweet Tomato Pie with whipped Harbison cheese, balsamic vinegar, and basil. She aims to provide diners with “either something rich and sweet that you just need one bite to satisfy, or something savory-sweet that fits in to the progression of a meal,” she says.

Desserts have been part of Crosby’s life since she was born. “I grew up with my grandparents owning a multi-generational bakery that I worked in as soon as I was old enough to see over the counter,” she says, adding that she’s worked in kitchens since she was 15. After studying culinary arts at a vocational high school, she received an associate’s degree in culinary arts from Southern New Hampshire University. She’s spent the past five years working at Black Trumpet, dividing her time between cooking, making pastries, and working in the front of the house.

Although Crosby says she changes a couple of things on the menu every few weeks so diners can always have something new, she maintains certain bases for her desserts—custard, chocolate, nut, fruit, and savory. But that seems to be the only thing conventional about her recipes. Fruit may appear in a pistachio-crusted Key Lime Bars, or in a Gingerbread Pineapple Upside Down Cake.

Even when Crosby makes a familiar dessert, she adds brightening elements. For example, the custard on one recent menu was a Sugar Pumpkin Flan with burnt orange chili caramel and a smoked pecan sandie. Her Whoopie Pie was dipped in dark chocolate and served with coffee milk and espresso bark.

“There is always comfort in classics, especially when they are done right,” she says. “Although speaking for myself as a diner and a chef, I just get bored of the same old thing and like to see something new to try.”

When it comes to chocolate, which seems a required ingredient for a certain holiday in February, Crosby has mixed feelings. “I love it and am addicted to it,” she says, “but I actually don’t like making chocolate desserts because it is something that you are expected to always have on the menu, and you have the added pressure of fulfilling someone’s craving. When making chocolate desserts, I try to stay basic to satisfy that need for it.”

That said, Crosby has developed some pretty delicious sounding offerings, like a simple but deeply rich Chocolate Pâté. A January dessert was a Chocolate Banana Boston Cream Pie with cherry puree and a cocoa marshmallow. For Valentine’s Day, she says, “I am featuring a Chocolate Fondue for Two. It will be a fun interactive dessert with some interesting dipping options.”