In ye olde New England, both taverns and homes often had bottles of rum on the shelves, a popular ingredient in Colonial cocktails. A “stone fence” mixed rum and hard cider and a “flip” contained rum, beer, molasses, and eggs, stirred with a poker glowing red from the hearth fire. Some of those old recipes are back, thanks to a resurgence in pre-Prohibition concoctions and our nerdy interest in sipping historical libations.

The more recent tiki drink craze from the 1930s and ’40s is also back and we see Painkillers, Zombies, and Mai Tais on many cocktail lists. Portland, Maine, has Rhum, a bar dedicated to tiki cocktail culture. On the Seacoast, the Blue Mermaid Island Grill in Portsmouth, New Hampshire; the Wallingford Dram in Kittery, Maine; and Vasa Waterfront Kitchen & Bar in Salisbury, Massachusetts, each use rum in exciting and different ways.

The origin of the Mai Tai is debated. Some say this quintessential tiki drink was invented by Victor Bergeron, aka “Trader Vic,” in 1944; others credit Don the Beachcomber in 1933. The Trader Vic legend says that the name might have come from a friend of Bergeron’s who, after tasting it, exclaimed, “Maita’i roa ae!”—Tahitian for “the best.” At the Wallingford Dram, Michael Pazdon and team make plenty of Painkillers, another popular tiki drink, but for many, their Mai Tai is indeed the best. 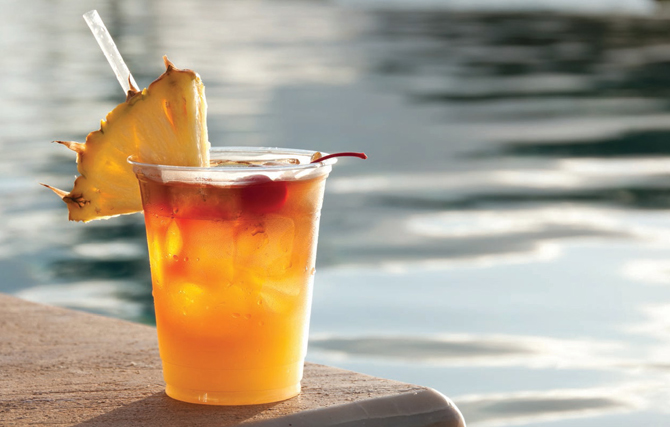 “Everybody ‘knows’ what a Mai Tai is, but there are two distinct kinds of Mai Tais,” Pazdon says. “What you normally get when you order a Mai Tai is what we call a Hawaiian-style Mai Tai—rum and usually orgeat, an almond cordial syrup. But then you’ll get all these weird combinations of fruit juice and grenadine, pineapple juice and orange juice, basically whatever the bartender wants to throw in there and they’ll call it a Mai Tai. That’s not technically a Mai Tai. The classic drink, the one invented by Trader Vic at the original Trader Vic’s in Oakland, is a blend of rum, orange curacao, orgeat, lime juice, and rock candy syrup. That basic framework is what we work off of for our version of the Mai Tai.

”Deciding which rum and what orgeat to use as well as which versions of the many other ingredients took quite a bit of experimentation, Pazdon says. “There are pretty credible recipes for the drink, and we actually know what rums Trader Vic used in his original Mai Tai, but those rums don’t exist anymore, outside of some esoteric collections. We don’t know the formulation of Trader Vic’s orgeat, whether it was house made or commercially made, and even if we knew the commercial brand that he might have used, there’s no way for us to know the recipe. It’s a problem with any kind of classic cocktail—you wouldn’t know the brand and it might no longer exist anyway, so you have to use your imagination and decide what tastes best to you.

”What they decided on is the delicious twist on the traditional Mai Tai they serve now. “We went with our best approximation of what the classic recipe was and, working off of that, we made our own orgeat, then balanced the drink around that. We experimented with different rums to make a ﬂavor that we believed in,” Pazdon says. “While our recipe is very close to the original recipe, it’s our interpretation of what tastes the best. For example, we don’t use any rock candy syrup, we just use more orgeat. Since it’s handmade, it has less bitter almond oil than a lot of commercial products will have. In order for the tiki ﬂavor of the Mai Tai to come through, we want to use X amount of it and the amount of sweetness that it adds de-necessitates the use of rock candy syrup.”

The Wallingford uses a blend of Jamaican rum and a little bit of Dominican rum in their Mai Tai. As for the other distinctive ingredient, curacao, they use a higher quality brand. “They’re all different,” Pazdon says. “We use Pierre Ferrand. You deﬁnitely never want to use triple sec in it. We try to adhere to the spirit of a classic drink as much as we can. But at the same time the rule is never to respect classicism over ﬂavor.”

The season doesn’t matter one bit when it comes to sipping fruity, colorful drinks with tropical ﬂair. We’ll escape a harsh winter or cool off in the summer with a tall, refreshing mojito. At Blue Mermaid Island Grill – now located in Kittery, Maine - Seacoast residents and tourists alike have been enjoying this oasis of Caribbean fare for more than 25 years. 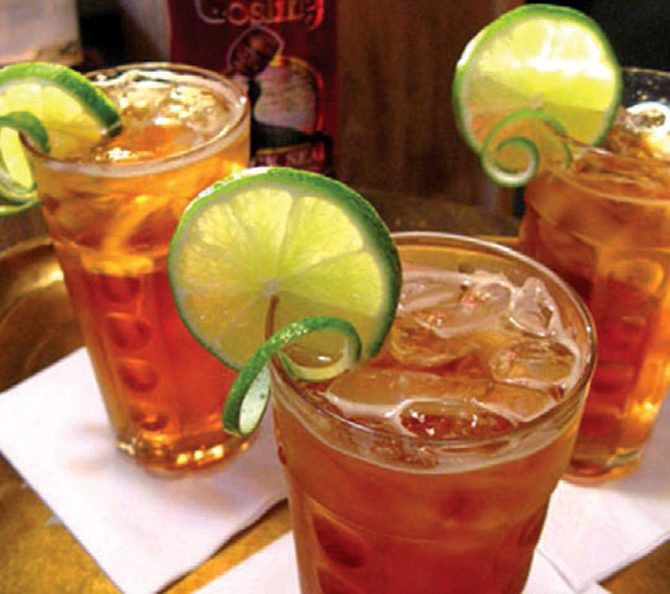 Bar Manager Breanna Augulewicz has been mixing up tropical coolers at the Mermaid for five years and says some of the most popular rum drinks are the Painkiller (light and dark rum, orange and pineapple juices, coconut, and fresh nutmeg), Mason’s Brass Monkey (ﬁzzy Pabst Blue Ribbon lager, juices, and a Myers rum ﬂoat), and the Jamaican Me Crazy (Bacardi pineapple rum, blue curacao, banana liqueur, and coconut). “Those are always popular, and we just added the Caribbean Sunset with Malibu and Bacardi rums, banana liqueur, and guava juice,” Augulewicz says. “There are a few drinks we have that have both light and dark rum to contrast the ﬂavors.

”The drinks at the Mermaid not only have ﬂavor appeal, but their festive colors and signature mermaid clinging to the rim of each glass are a draw as well. “A lot of the waitresses have been using Pinterest for inspiration, and we tweak it to make it our own,”Augulewicz says.

Blue Mermaid also balances out the sweeter tropical drinks with cocktails that might pair better with food. “People get the really sweet drinks because they’re craving it, not because they’re good to have with food, although the tropical drinks are good with spicier dishes,” Augulewicz explains. “In the winter people like our Dark and Stormy with ginger beer made in Maine. It has a little spiciness.” Come summer, she says, “They want to feel like they're in the tropics more. They want to feel like they’re on vacation.”