Where to Eat & Drink? Join our NEW Taste Facebook Group
Keeping Our Seacoast Community Updated in Light of COVID-19

Seafood at its purest on the Seacoast

There was a time when nearly every seaside town in America was lined with sidewalk oyster bars, and fresh fish was served off the boats and flavored with ingredients at hand. It looks like we’re returning to those roots as a raw fish trend spreads throughout the Seacoast. From briny, just-shucked oysters and live clams to paper-thin scallops and slivers of fresh tuna, local chefs are serving us the sea in one beautiful bite. It coincides with our movement towards clean, wild, and sustainable eating. Raw fish can be healthy, too, packed with brain-boosting, heart-healthy omega 3 fatty acids. And arguably, no other food evokes such a strong sense of place. With every shuck, slurp, pinch, fork, and spoonful, we taste where the blissfully briny morsel comes from. And the experience is all the more enjoyable when shared with others.

“I think raw bars are becoming so popular because of the communal dining aspect of it. Sharing a dozen (or two!) oysters with a dining companion while discussing the subtle differences between the varieties makes for a memorable experience,” says Mackenzie Campbell, restaurant manager at Brine in Newburyport, Massachusetts. “Sitting at our bar with a crisp French white and a variety of seafood is the ultimate way to begin a meal.” Get ready to engage your palettes and awaken your appetites. Here’s a roundup of Seacoast restaurants guaranteed to get you hooked on raw bars. 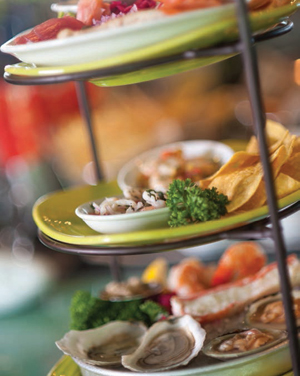 The seafood-centric, waterfront Surf Restaurant in Portsmouth boasts one of the best raw bars in the region, and one look at the buzzing dining room and you know it has struck a chord with Seacoast diners and visitors alike. “When we opened the original Surf in Nashua in 2002 we wanted the raw bar to be a centerpiece and a focal point of the restaurant and menu,” says General Manager Ian Buckley. “We saw that people were starting to gain interest in high-quality raw seafood and we’ve seen its popularity in both our locations really grow since then.” The raw bar indeed takes center stage in this sleek space overlooking the Piscataqua River. Here’s your plan: start with an Oyster Shooter, perhaps the salt-rimmed tequila with fresh lime, shallots, chives, cilantro, and parsley or the Cajun-spiced vodka variation. Now order the Deluxe Raw Sampler, a tower of briny deliciousness, that includes oysters, clams, steamed shrimp, smoked trout and salmon, tuna crudo, a spicy scallop ceviche, and lightly marinated calamari. While you’re waiting for them to create this masterpiece, enjoy the Hot Stone Tuna, which comes with two sauces, a seaweed salad, and a cup of sushi-grade tuna slices, surrounding a chunk of searing hot granite. Go ahead and cook the tuna to your liking, though a quick flip, if anything, is all it needs. 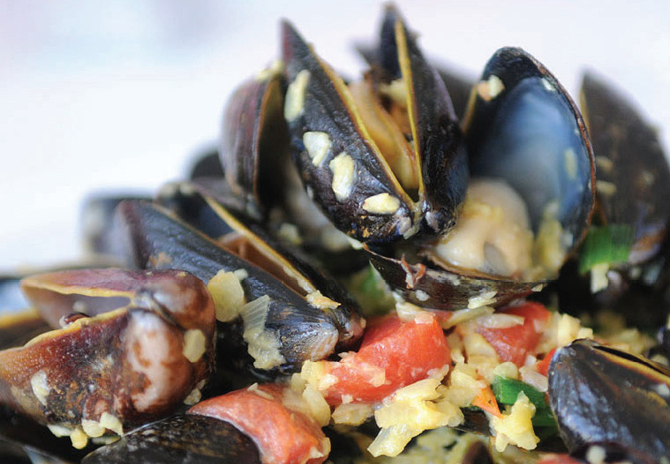 Perennial favorite Jumpin’ Jay’s Fish Cafe was one of the first restaurants in Portsmouth to offer a raw bar. Anytime you go, there’ll be a crowd of diners enjoying raw bar classics like oysters, littleneck clams, snow crab legs, and steamed shrimp (“Our guests love our jumbo shrimp cocktail,” says Lauren Gordon, the restaurant’s marketing and function coordinator). The Raw Bar Sampler includes all these, plus the restaurant’s popular Marinated P.E.I. Mussels. “Our raw bar selection remains relatively consistent year round,” Gordon says. “However, the items themselves might come from different locations, depending on the season. We change our menu daily to reflect the freshest items available to us.”

Long before raw fish became swanky and cool, it was a common man’s (and woman’s) fare, shared with friends at an unfussy local, seaside hangout. Portsmouth’s Oar House evokes a bit of that nostalgic, seafaring atmosphere. Grab a seat on their deck along the Piscataqua River and hang out with friends while you listen to live music and slurp slippery Wellfleet Oysters. Other raw bar selections include Count Neck Clams and Steamed Shrimp. Even better, leave work early to take advantage of their Shuck-a-Buck and shrimp plate special, offered Monday through Thursday in between lunch and dinner. 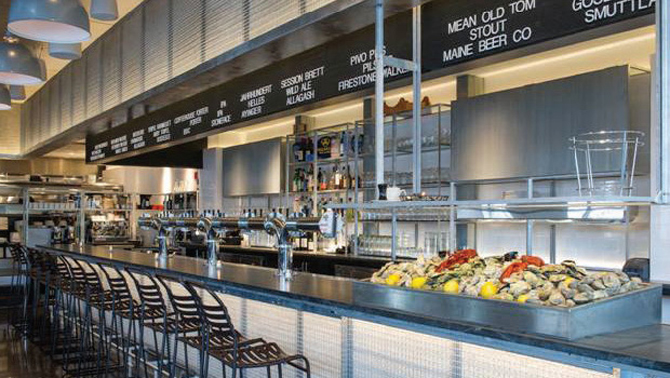 Newly opened in Portsmouth is Row 34, with a hip, energetic vibe. The industrial-style dining space, with high ceilings, warehouse lights, vintage subway tiles, and steel accents is anchored by a long bar and open shucking station. Conversation flows as easily as the draught lines and wine pours in the relaxed, open space. “As soon as we started spending time in Portsmouth we saw a dynamic community that we wanted to be a part of,” says restaurant partner Garrett Harker. “We feel excited that Row 34 can help contribute to that.” The raw bar features an impressive lineup of oysters, as well as other local favorites. 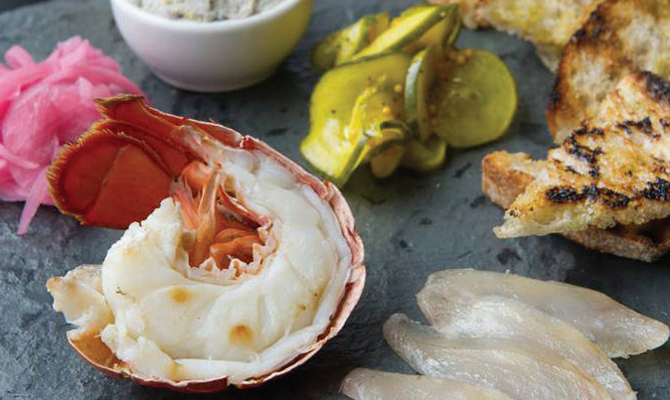 The menu also offers classics like littleneck clams, shrimp, and chilled lobster from York, Maine. The Crudo/Ceviche menu includes selections like Fluke Crudo served with chervil aioli, Tilefish Ceviche with fennel and jalapeño, Scallop Ceviche with coconut milk and red curry, and Salmon Crudo with toasted sesame and spicy aioli. Also on the raw bar menu is a section of smoked and cured offerings served with grilled bread, pickled onions, and crème fraiche. The Bluefish Pâté is a standout, made with black tea, shallots, chives, tarragon, and lemon zest. Make it easy on yourself: if it’s available, order the Smoked & Cured Board for a tasting of each. The restaurant has a smart wine list and a strong beer program. (For Row 34's Halibut Ceviche recipe, click here.)

The other new kid on the block is the Franklin Oyster Bar from Portsmouth restaurateur Jay McSharry (Jumpin’ Jay’s) and chef Matt Louis (Moxy). The raw bar has Scallops, Peekytoe Crab, Salmon Tartare, Octopus, Flounder Ceviche, and an impressive selection of oysters from New England and beyond. 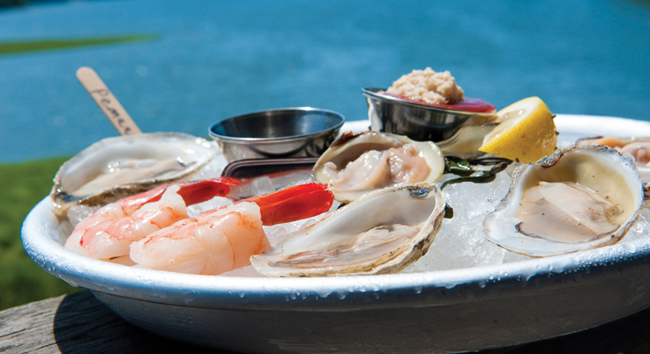 Sit down at the raw bar at Robert’s Maine Grill in Kittery and you’ll get a quick education about how much terroir and growing conditions affect the flavor and texture of raw oysters and clams. Servers are briefed on the provenance and taste of each variety and are eager to share their knowledge. The lively restaurant, with peek-a-boo views of Spruce Creek, offers littleneck clams from Casco Bay in Maine, and oysters from Maine and New Hampshire. “We’ve increased our selection from three a day to sometimes seven or eight varieties a day,” says owner Michael Landgarten. “Interest in the raw bar is growing like crazy.” Favorites include the Pope’s Creek Oysters from Wells, Maine, grown by Erin Gott in the Webhannet River. The oysters are grown in small batches on the surface and only harvested from December to May. “I think these oysters are one of the best kept secrets out there,” says Executive Chef Brandon Blethen. “There is only a limited amount each year and they’re fantastic with a nice local IPA.” Other favorites include Fat Dog and Wagon Hill Oysters, both grown in Great Bay, New Hampshire. Can’t decide? Order the Colossal Tower, with 20 oysters, nine littleneck clams, nine cocktail shrimp, and a half lobster to share with family and friends. 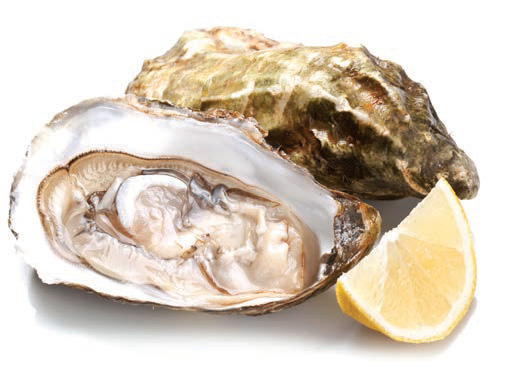 If you’re heading to Portland, be sure to check out two of their top raw bars. The Old Port Sea Grill & Raw Bar, with its 250-gallon saltwater fish tank and nautical setting, boasts “one of the most diverse raw bars in the city.” Oysters get top billing and are sourced from within a 100-mile radius, along with littleneck clams, shrimp, and lobster. They also prepare a variety of sashimi-style local fish, like hake, skate, and cod, depending on the freshest catch of the day. Locals crowd in for their daily happy hour, when the chef prepares an early raw bar special. 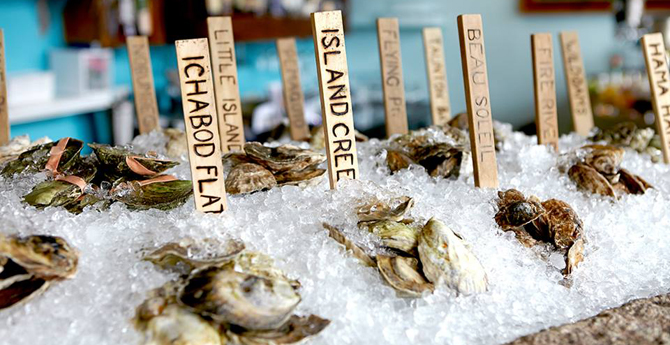 At happening Eventide Oyster Co., you’ll find one of the largest and best selections of oysters in the city. The menu is divided into oysters from Maine and oysters “From Away.” Typically, there are about 10 choices of each. Maine oysters might include Winter Point Selects, Norumbega, John’s River, North Haven, and Wild Belon. Out-of-state bivalves on the menu might include Hama Hama, Kasshi, Kumamoto, Duxbury and Fisher Island oysters. Also on the menu are Littleneck and Mahoghany Clams, Raw Lobster Tail, Fluke Crudo (served with cured Maine plums and fermented radish), Tuna Crudo (with a ginger-scallion sauce), and cold, lightly poached Arctic Char. Diners have a choice of several creative sauces and accoutrements, like Pickled Ginger Ice, Horseradish Ice, Kimchi Ice, Cucumber Ginger, and Pickled Red Onion. 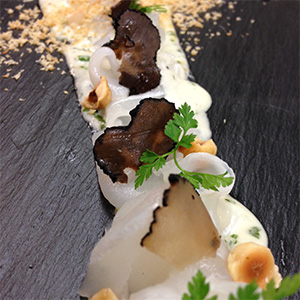 Intimate, upscale Brine in Newburyport is dubbed New England’s first oyster, crudo, and chop bar, and is restaurateur Nancy Batista-Caswell’s innovative take on surf and turf. The contemporary dining area with marble and chrome accents is tiny, but the menu and wine list is creative and ambitious. Ostreaphiles will find a variety of briny bivalves, including those from the sought-after East Dennis Oyster Farm in Massachusetts and from purveyor Seaport Fish in Rye, New Hampshire. “We are on the phone with them every morning looking for the newest, freshest, most unique product to bring to our guests,” manager Campbell says. “Our oyster card can change up to three times a day.”

Brine’s crudo menu is a showstopper too, with complex and artfully-prepared dishes like Atlantic Salmon served with pickled cucumbers and smoked egg, Yellow Fin Tuna with lentils, pomegranate, beets, and raisins, and Sea Scallop Ceviche with grapefruit, jalapeno, and caviar. Selections change depending on what’s fresh and available. Brine is also one of the only restaurants in the area with a focus on caviar, offering a rotating selection of small tastings. “We’re incredibly proud to be able to provide people the opportunity to taste different varieties of caviar to discover their subtle nuances, much like the nuances between oyster varieties,” Campbell says. If you’re dining with carnivores, no worries. A portion of the menu is devoted to fork-tender, prime steaks. 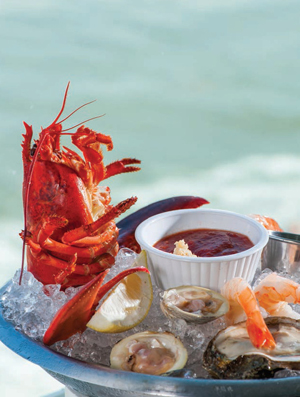 Few would argue that the best place for a raw bar is within sight and scent of the water. That’s one of the reasons we love the Seaglass restaurant in Salisbury, with in-your-face-views of the Atlantic Ocean. Fortunately, the food lives up to its primo oceanfront setting. If schedules allow, we head there for Wednesday Night Raw Bar, when the lounge serves $1 oysters and clams and $2 shrimp. But any night of the week, the raw bar serves fresh Cape Cod Oysters, Wellfleet Littleneck Clams, Black Tiger Shrimp, and Tuna Tartare, all good ways to begin a memorable meal. The restaurant specializes in seafood, showcasing an impressive offering of fresh catches, and signature dishes like the Tuna Steak Au Poivre, Sage Tattooed Salmon, and Tuscan Grilled Swordfish Steak—order them rare, of course!